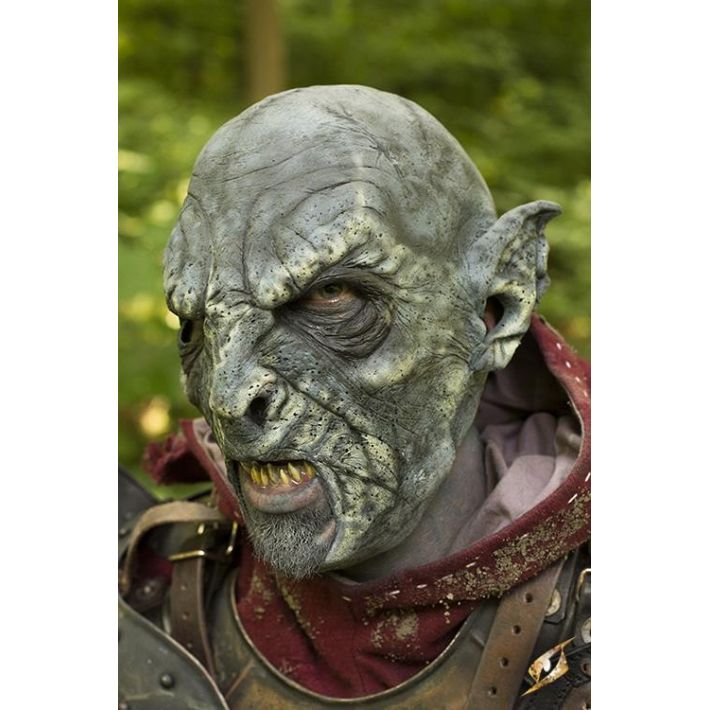 5 Elements - your larp shop. Epic Effects' Blue Bestial Orc is a full Orc Mask with a serious angular face, perfect for a rough and severe Orc soldier. 5 Elements e-store - the best selection in Poland! Come and pick something for yourself.

By buying this product you can collect up to 298 loyalty points. Your cart will total 298 points that can be converted into a voucher of 14,90 zł.

This product is handmade and/or hand-painted and therefore unique. As a result, this product can have natural deviations in pattern, colour and shape, which are not considered defects or faults. Measurements are all in cm if not stated otherwise.

War is all that you know. For your clan, war is a permanent state of being. Just as you need meat to sustain you and leather armour to protect your leathery green skin, war keeps your thirst for chaos and violence sated.

Your clan now gathers to prepare for the war against the goblins. The creatures used to be your allies, but in the last battle they became cowardly and ran. Now there is nothing more to be done than to hunt down every one of them and serve them over your fire.

Epic Effects' Blue Bestial Orc is a full Orc Mask with a serious angular face, perfect for a rough and severe Orc soldier. This mask has a classic orc's distinct features: a belligerent expression with low, furred brow; serrated pointy ears; and a plain nose with large nostrils. The skin is leathery and handpainted grey-blue with darkened creases and furrows, giving the impression of recent battles. With such attention to detail, this mask has a menacing appearance while also maintaining realism.

The mask is open at the mouth, displaying the wearer's lower lips and most of the chin. This leaves room for the wearer to speak and be heard properly, and allows a much larger range of expressions. Add your own orc teeth to create an even greater effect! The mask is made from thick 100% natural high-quality latex, making it strong and durable, ensuring long life and extended reuse. The mask is made with good room for breathing and ventilation, thus improving comfort with extended wear. The look and style of the mask can be modified by highlighting it with Epic Effects' Water Based Makeup from event to event.

Clean the insides of the mask with a moist cloth or sponge with a small dosage of detergent after every use to ensure the removal of remains from the skin contact. After drying secure with talc. Latex masks from Epic Effect require maintenance with the Epic Armory silicon spray to retain their flexibility and protect them from dust or damage. Apply the spray on the whole mask and clean with cloth. Store the mask on a styrofoam head or fill it with foil bags to keep it in desired shape.

Be the first to write a review!
.